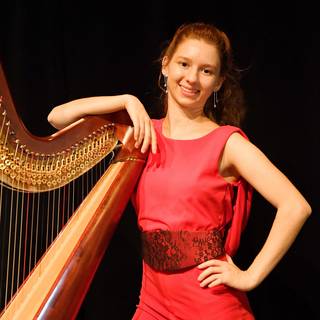 Amaëlle Savary is a harpist, singer and dancer who combines the arts for a music open to all. Throughout her musical career, she works with the greatest names of the harp: Caroline Lizotte, Valérie Milot, Marie-Monique Popesco, Gaëlle Thouvenin, Sébastien Horer, Fabrice Pierre, Elizabeth Fontan-Binoche... She has played with numerous orchestras such as the Orchestre Mozart Toulouse, the Orchestre de Laval, the Orchestre Symphonique du Saguenay Lac Saint Jean, the Société de Musique Contemporaine du Québec and others. After having been a valedictorian during her BA in performance at the Institut Supérieur des Arts in Toulouse, she continued her career in Canada at the Université de Montréal, where she obtained, in 2022, A master’s degree in performance unanimously with the jury’s congratulations.

She won eight first prizes at the French Harp Competition, the first prize at the Concorso Internazionale del Arpa Marcel Tournier (Italy), the Editions Lemoine prize for the best performance at the Martine Géliot International Harp Competition (France). She received the Chapelle Historique du Bon Pasteur award at the Université de Montréal (Canada) Concerto Competition and participated in the 12th International Harp Competition in the United States. Most recently, she received the Senécal Award at the Ottawa Symphony Orchestra Concerto Competition and had the pleasure of playing as a soloist with this prestigious orchestra.

She is currently collaborating with composer Ian Shaw on the creation of new works for solo harp and orchestral harp. In 2019, the composer Patrice Fouillaud composed and dedicated to his L'envol de Canen après son dernier chant d'amour. She recently recorded this piece which will appear in the next album of the composer. Since the age of eight, she has performed in concert to promote the harp and its repertoire.