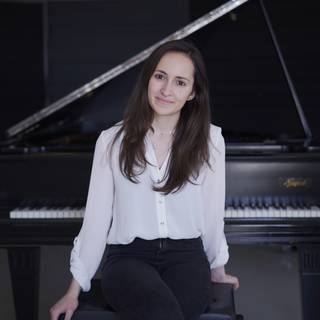 Sarah Vella started piano lessons with Dr. Charlene Farrugia (LRAM) under whose tutorship she obtained her LLCM and LRSM Diplomas. She furthered her studies with Professor Michael Young at the Royal Welsh College of Music & Drama (RWCMD) where she was awarded a Master of Music in performance with distinction. Prior to commencing her studies in Cardiff, Sarah had given various solo and chamber recitals/performances in several distinguished venues in Malta, namely Robert Sammut Hall, St. James Cavalier, Palazzo De la Salle, Palazzo Pereira, Villa Bologna, the residence of the Italian Embassy. Sarah had also been appointed as an accompanist for the Malta Philharmonic Orchestra (MPO) Chorus as well as for other Malta Youth Orchestra (MYO) projects on several occasions. During her time at the RWCMD, Sarah was able to perform extensively whether in solo or chamber settings. Among others one may mention performances held at Gloucestershire and Clevedon, a two-piano recital at Oxford University, and a piano and percussion project which culminated in a concert in the Dora Stoutzker Hall. Sarah has also been able to participate in several master classes, namely with pianists Yeol Eum Son and Joseph Moog.
Sarah is currently furthering her studies at the Université de Montréal with Professor Jimmy Brière. She is very kindly being supported by the Joseph Calleja Foundation and the Endeavour Scholarship Scheme financed by the Government of Malta.