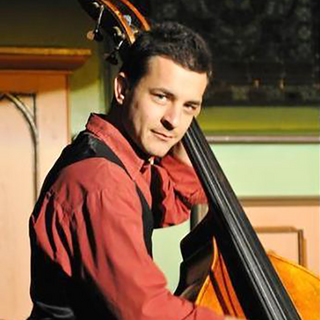 French bass player and composer Olivier Babaz has gained a rich sideman experience on stage and in the studio in France, Indian Ocean and Canada. He multiplies original creation projects such as Akoz duo, releasing the 2012 debut album "La Lune de Kala" and collaborates actively with numerous musicians from the Montreal scene. In 2013 He released his first trio album, Midnight Cafeine. An in-demand musician, he is one of the few bass player as confortable on electric than on acoustic.

His personnal path led him to obtain a first prize Jazz bass interpretation gold medal from Conservatoire while studying classical double bass. He is a Music Academy  International graduate (Nancy) and studied in Paris at the Centre des Musiques Didier Lockwood. Finally, he obtained a DESS in Music for motion pictures at UQAM in 2011.

He has been teaching more than fifteen years, mainly electric and upright basses as well as improvisation and rythm under its various forms and points of view.
www.olivierbabaz.com