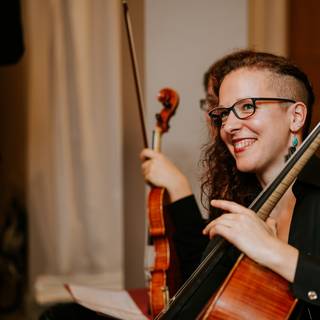 Playful musician, Marie-Michel Beauparlant is very active on the classical Quebec scene where she regularly plays with various professional ensembles such as the Quebec Symphony Orchestra, Les Violons du Roy, the Montreal Classic Orchestra and I Musici. Curious, she also perfected herself in early music, playing with the Tafelmusik ensembles from Toronto, La Cigale, Enigme and Telemann. Versatile, he was found on stage with the FILMharmonique ensemble during the screening of several films, with DJ Kygo at the Quebec City Summer Festival and on the program Belle et Bum at Télé-Québec. Finally, a great fan of dance, she works on the “Two to Tango” project where she explores dance music for cello in various formations, working to create her own arrangements.

Marie-Michel holds a degree from the Montreal Conservatory of Music, a master's degree from Rice University and a doctorate from Stony Brook University, where she studied with Colin Carr. Winner of the Concerto contest of the Montreal Conservatory of Music (2004), of the Young artists contest of Radio-Canada (2006), she is also a two-time finalist in the Concours du Canada. Recipient of several scholarships, she had the honor of being invited to the prestigious Tanglewood Music Center in Massachusetts (2006-2008), where she worked with the musicians of the Boston Symphony Orchestra and James Levine. During her years of study, she participated in several master classes with internationally renowned musicians, including Yo-Yo Ma.

Since 2018, she has also been teaching cello at the Vincent d'Indy School of Music at the college level.