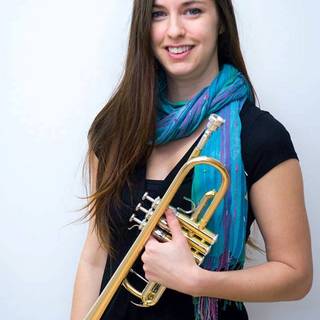 Laurianne Bellavance is a Victoriaville native, where she began her study of the trumpet at the age of 12. In pursuit of perfecting her craft, she has worked in a variety of ensembles, amateur to professional, from chamber music to full symphony orchestra. In 2015 she graduated with a Master's degree from Le Conservatoire de Musique de Montréal. Laurianne has taught the trumpet both privately and in small groups in a number of settings, including both elementary and secondary school levels, from Sherbrooke to Montréal since 2008. Since 2013 she has been the trumpet professor for Le Pre-Conservatoire de Musique de Montréal. She is becoming more and more in demand across the classical music scene in Québec. Most notably, she has collaborated with the orchestras of Longueuil, Drummondville, l'Orchestre des Grands Ballets Canadiens and l'Orchestre Metropolitain, as well as a number of pick-up orchestras. She has been a featured soloist with the University of Sherbrooke in 2010, where she performed the trumpet concerto of Alexander Arutunian, and with l'Orchestre Symphonique de Longueuil in 2012, performing Telemann's concerto in F minor.