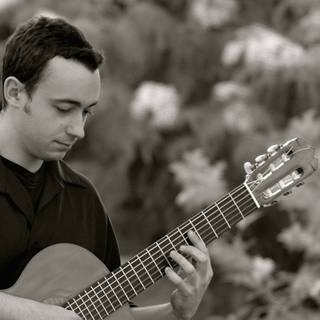 Jasmin Lacasse Roy is one of the most intense and honest artist of his generation. During his studies of the guitar at the Montreal Conservatory of Music and the University of Montreal, Jasmin was a top prize winner in many international music competitions including: Canadian Music Competition, Clermont Pépin competition, Music competiton "Bas-Richelieu" and the "Prix d'expression" of Quebec City, among others. He also as received the prestigious "Thérèse Filion" prize awarded at the Clermont Pépin international competition for the most outstanding performance of the competition. In 2008, Jasmin won first prize at the "Montreal Grand Prize of Guitar"and was also the laureate of a grant from the Council of Arts and Letters of Québec.

After being the chosen performer for the 2007 Montreal Guitar Society’s “New Talent” Concert, Jasmin was invited to play at the McGill University’s Tanna Schulich hall, the “Chapelle Historique Bon- Pasteur” and the Museum of Fine Arts of Montreal.

Jasmin was also a featured soloist at several international classical music festivals such as the Domaine Forget Music festival, the Guitar Festival of Ottawa and many guitar societies including the Montreal Guitar Society and Claude McKinnon Guitar Society. He has performed at the grand opening of the "Grande Bibliothéque de Montréal" and for the Montreal Guitar Salon. Jasmin was also invited to play at the Montreal Jazz Festival, an honor rarely given to a classical musician.