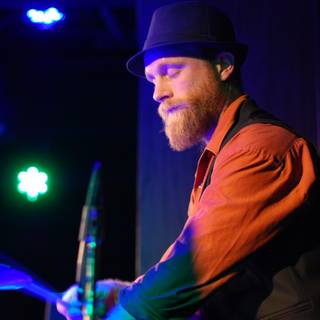 From Vancouver, Ivan Bamford has appreciated jazz since the age of 3. Later he left sports to dedicate his life to music. Claude Ranger and Dylan van der Schyff taught him how to improvise on the drums. He played with great musicians such as André Lachance, Bruno Hubert, Alan Matheson and Coat Cooke before moving to Montreal in 2001, where he found a rich scene and superb musicians. Since then he has found himself in numerous groups of different styles: Gadji-Gadjo, Weshida, Katya Sourikova trio, Straight Pipe, Kitchen Party and his own group Bam Bam. He has played all over Quebec, France(2008), North America and Romania(2009) and at jazz festivals in Vancouver(99-00), Montreal(2004-2010), and in Baku Azerbaïdjan(2005).  In 2009 he received a composers grant with Gadji-Gadjo.  As an educator he has over the past 8 years taught students from all ages.