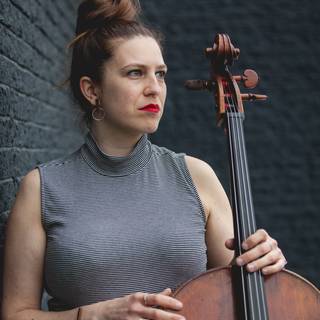 Élisabeth Giroux is a graduate of the Montreal Conservatory of Music in cello. At the end of her studies, she took part in the world tour of the Amjad show with the dance company La La La Human Steps. She also collaborates with Angèle Dubeau and La Pietà during the 2010-2011 season. Elisabeth plays regularly as a supernumerary with various symphonic orchestras in Quebec in addition to devoting to her creative projects and teaching. She has participated in the recording of more than twenty albums with different projects and artists since its inception.

Her talent, her love for the cello and her attraction to other musical styles allowed her to become, over time, a very versatile musician. In recent years, Élisabeth has been increasingly active on the traditional Quebec music scene. She collaborates in particular with the composer and multi-instrumentalist Jean-François Bélanger. In 2015, she co-founded the É-T-É trio with her two acolytes.