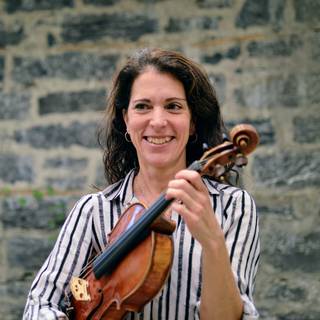 Elisa has always been impassioned with music. At the tender age of 4, she had already started her apprenticeship of music and is thus very to children’s interest in this art form. Throughout her scholastic education, she attended music-oriented schools.

As an active and versatile musician, Elisa is a permanent member of the Orchestre Symphonique de Longueuil since June 2003 and of the Grands Ballets Canadiens Orchestra since 2001. She has played and collaborated with the main professional musical formations in Québec, such as the Montreal Symphony Orchestra, the Violons du Roy, La Pieta, the SMCQ, the symphonic  orchestras of Trois-Rivières, Sherbrooke, Laval. She performed as viola solo with l’Orchestre Mondial des Jeunesses Musicales, the Boris Brott Festival, the Orchestre Symphonique de Longueuil and at the American Institute of Musical Studies in Austria.

Ms Boudreau has a diploma of Superior Studies from the Conservatoire de Musique de Montréal where she studied under Mr Robert Verebes. She then perfected her skills with Mr Roy and Mr McNabney at McGill University, where she obtained a degree in interpretation with High Distinction. Then, at the Université de Montréal, under Ms Puchhammer, she obtained a Superior Diploma specialized in Orchestra Repertoire.

In the mist of her studies, she benefited from the knowledge of such great masters as Yuri Bashmet, Serge Collot, Heidi Castlemann and the Pasquier Trio. The young viola player made several trips to Europe for perfection sessions with Nobuko Imai, Ettore Causa, Tabea Zimmermann and Pierre Lenert. She was awarded grants by the Centre d’Arts d’Orford, the Canadian Arts Council and by the Conseil des Arts et des Lettres du Québec.

Elisa Boudreau considers that learning music while young contributes in a very significant way to human development. She has taught violin and viola to primary and secondary level students and has directed string sections in music camps and secondary schools since 2000. She was a member of the Pierre-Laporte High School staff from 2003 to 2018.