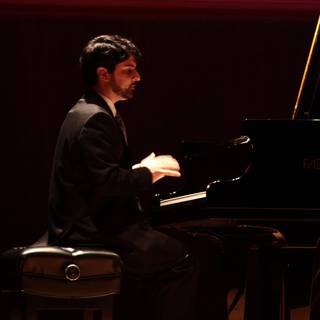 He was selected for the Cycle of Concerts for Young Performers in 2002 by the Bank of the Republic of Colombia. He won the first prize in the 3rd « Maria Clara Cullell » International Piano Competition in San José, Costa Rica, in 2004. In 2005 he won an Honorary Diploma in the National Piano Competition in the Industrial University of Santander, Bucaramanga, Colombia. As a concert pianist, he has played solo recitals in Colombia, Costa Rica, Uruguay, Argentina and Canada.

Daniel Áñez specializes in contemporary repertoire. He is part of « Ensemble CG » in Bogota, as well as Ensemble Allogène, Wapiti, Ciao Rhino and Ensemble Paramirabo in Montreal. He has participated in the premiere of works by Colombian composers Rodolfo Acosta R., Daniel Leguizamón, Camilo Méndez, and Ana María Romano, as well as premieres by Canadian composers André Hamel, Adam Basanta, Cassandra Miller and Michael Larocque, amongst others. He specializes in Latin-American repertoire.