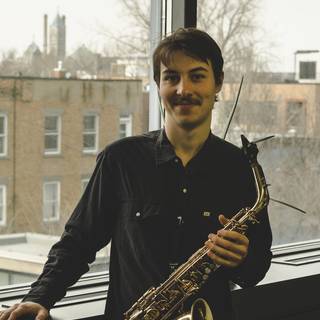 Originating from Gatineau, Antonin Bourgault studied at the Gatineau Conservatory with Sébastien Tremblay and then completed a Masters Degree in classical saxophone with André Leroux at the Montreal Conservatory in 2019. Participating in different workshops, he also had the opportunity to learn with the masters Timothy McAllister, Jean-Yves Fourmeau and Louis-Philippe Bonin.

As an interpreter, Antonin joined the saxophone quartet Ensemble Saxologie for the OSM’s Virée Classique in 2019, created a piece by Hans Martin in Codes d’Accès’ Cod’a 2020 concert, played in the new music ensemble 333 ToutArtBel in a concert presented by the Société de musique contemporaine du Québec in 2021, and played with the Montreal Conservatory Orchestra as well as the Orchestre de la Francophonie in 2019. Antonin is also active as an improviser on Montreal’s experimental music scene, playing with Dominic Jasmin and Victor Burton-Dallaire. His improvisations take place in acoustic, mixed and transdisciplinary contexts. In parallel with his practice as a performer, he composes electroacoustic and mixed music works.

Antonin’s experience as a teacher started during his teenage years in musical camps of the Outaouais region. Through the years, his great passions for music and knowledge tranfer fed his dedication to teaching his instrument. Apart from teaching at the Cooperative, Antonin is the saxophone specialist in the music program of the Cité-des-Jeunes secondary school.