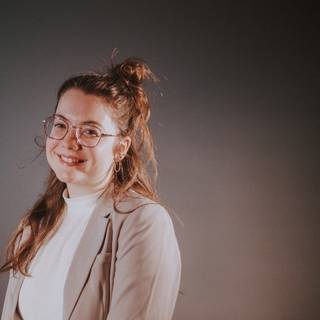 Juliette Duguay began studying the harp with Christiane Gendron at the age of six. At the same time, she studied the cello for 9 years with Mariève Bock, Elizabeth Dubé and Philippe Borzelli. It was in 2010 that she entered the Montreal Conservatory of Music, in the harp class of Manon Lecomte. Juliette was also part of the Voix d’Elles choir for ten years and then part of the Filles de l’Île choir for two years. During the 2016 season, the young harpist studied the harp with Caroline Lizotte, then acting professor at the Conservatory. Since September 2017, she has been working on her instrument with Valérie Milot. Since 2018, Juliette has received an annual scholarship from the Fondation de soutien aux Arts de Laval as well as from the Orford Music Academy in 2018, 2019, 2021 and 2022 - where she was able to follow internships with masters Caroline Lizotte and Jennifer Swartz - and scholarship from the Maine Coast Harp Institute in 2022. Juliette is also in demand as a soloist: among other things, she has been invited by the Orchestre symphonique de Longueuil to play in the orchestra's Prélude series, has performed at the 2018 of the Grand Premiere of future stars at Place des Arts, gave recitals as part of the Sonnez les Matines de Longueuil days in 2017, 2019 and 2022, gives a solo recital for Religious Heritage Day in 2022, and has had the opportunity to play as a soloist with the Grand orchestre à cordes du Conservatoire de musique under the direction of Denis Brott in 2019. In addition, she regularly joins various ensembles, such as the Orchestre de la Virée Classique conducted by Kent Nagano in 2018, to the group Angèle Dubeau et La Pietà in 2019, has been regularly engaged to play with the Orchestre des jeunes de Montréal since 2018, participated in the Jardins d'Espagne concert of the Orchestre Symphonique de Trois- Rivières in 2020, at Musica Femina in 2022, at the Orchestre de l'Agora in 2022, as well as at the Orchestre Métropolitain for their Opéra de Montréal production Il Trovatore in September 2022, among others. At the same time, she has been teaching at various places: the harp at the Coopérative des professeurs de musique since 2019, choral singing as a coach at the Voix d'Elles since 2020, as well as the harp at the Collège International des Marcellines since 2022.