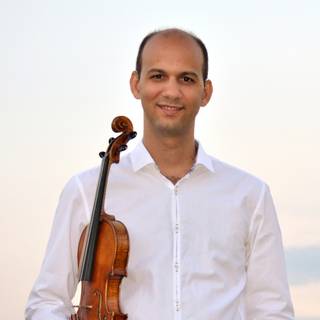 His great versatility has allowed him to master the music scene and share his career as a violinist, chamber musician and orchestra conductor, parallel to his work as a teacher and Founder - Artistic Director of the Formandi Festival.

From an early age he has had the pleasure of performing on several occasions as a soloist, highlighting: his Swiss Tour with the "Sinfonietta of Genève" (Frank Martin Hall in Geneva, among others), the New Year's Concert of Jalisco Philharmonic Orchestra (Teatro Degollado in Guadalajara) in Mexico and its numerous concerts in Venezuela with: the "Simón Bolívar" Symphony Orchestra of Venezuela (Social Action for Music Center) and Caracas Municipal Symphony Orchestra (Teresa Carreño Theater and National Theater) in Caracas, among others.

His commitment and nature for pedagogy, has led him to be a violin teacher at the Music Department of the Guadalajara University in Mexico, at the "Simón Bolívar" Conservatory of Music in Caracas and he has been invited to give masterclasses in different cities of Venezuela and Mexico. He has prepared students that have been accepted in prestigious conservatories, universities and orchestras around the world.

Due to his extensive orchestral experience, he has toured the world. He was a member of the Simon Bolivar Symphony Orchestra of Venezuela (1998-2002), of the Madrid Symphony Orchestra of the Teatro Real (2007-2010), and Principal of Seconds Violins of the Jalisco Philharmonic Orchestra, in Guadalajara - Mexico (2015) -2016). During his stay in Geneva (2002-2007), he was a frequent guest as a violinist of the Suisse Romande Orchestra and the Lausanne Chamber Orchestra, in Switzerland.

Throughout his career he has had the privilege of being under the baton of renowned conductors, such as: Gustavo Dudamel, Semyon Bychkov, Marek Janowski, Pinchas Steinberg, Claudio Abbado, Jesus Lopez Cobos, Christian Zacharias, among others.