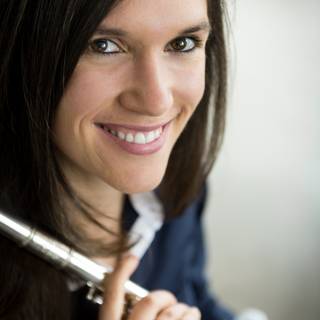 Flautist Marilène Provencher-Leduc holds a doctorate in performance from the University of Montreal focusing on the analysis and interpretation of works by Karlheinz Stockhausen (2016) and also graduated from the Montreal Conservatory of Music (2010 ). She is a scholarship holder from the Stockhausen- Stifung für Musik foundation in Germany (2011), the Quebec Research Fund on Society and Culture (2014-2016), the Conseil des Arts des lettres du Québec (2016) and the Conseil des Arts of Canada (2018 and 2019).

As a soloist, Marilène stands out for her great versatility and her marked interest in contemporary music. She was invited by the Contemporary Ensemble of Montreal in March 2019 for the interpretation of a colossal work by K. Stockhausen. She also performs Denis Gougeon's Oiseau blessé (SMCQ 2014 tribute series), is a soloist during the Concert-creation of the Société de Concerts de Montréal (2017) as well as with the Trois-Rivières Symphony Orchestra ( Concert Bach 2017) and the McGill Contemporary Ensemble (CME) for the interpretation of… explosante-fixe… by Pierre Boulez (2018) in the Pollack hall. She joins several orchestras and ensembles including the Ensemble Modern Academie in Austria, the Eastern European music octet Oktopus (nominated for the instrumental album of the year at the Juno Awards 2018), the Orchestra Trois-Rivières Symphony, the Estuary Symphony Orchestra, the Agora Orchestra, the National Youth Orchestra of Canada, etc. Finally, she loves sharing her passion through education and has been a member of the Montreal Music Teachers' Cooperative since 2012.