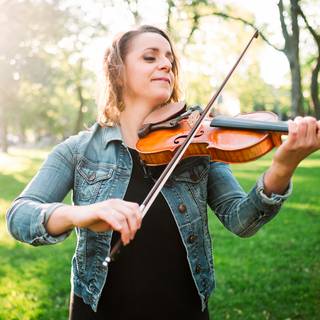 A versatile violinist, violist and fddler, Marie-Pierre Lecault is an energetic presence on the Quebec music scene at home and abroad. With a degree in classical violin from Université de Montréal and having immersed herself in the world of Quebec traditional music, she now devotes a large part of her career in promoting trad through performance, composition and arrangement. Over the past ffteen years, Marie-Pierre has accompanied various groups on tour, in the studio, and on flm and television. She has travelled the world alongside Bon Débarras, [ZØGMA], Edith Butler and Adam Cohen. Other notable collaborations include her work in Le Quatuor Trad with Le Vent du Nord as well as with 2015 Francouvertes prize winners, Élixir de gumbo. Her most recent project, La Suite - Inventions pour deux violoneux, is a co-creation with fellow violinist Robin Boulianne in which they explore an original repertoire infuenced by trad past and present. Marie-Pierre is also an active teacher, frequently invited to give workshops around
the world.