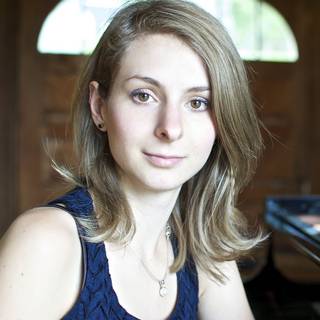 Since her solo debut with orchestra at the age of 14, under the baton of Louis Lavigueur, Marianne Roy-Chevarier has been lauded for her refreshing and elegant performances. She has won prizes at numerous regional and national competitions, including the Concours de Musique de la Capitale, the Festival de Musique Classique de Valleyfield and CMC. She has been invited to perform throughout Quebec, from the “Concert sous les chandelles” series in Montreal and Longueuil.

In 2013/2014, Mlle. Roy-Chevarier will be appearing alongside violinist Karine Bouchard at Montreal’s ‘Chapelle historique du Bon-Pasteur’, as well as performing Schumann’s Piano Concerto with the Levis Symphony Orchestra in May (Gilles Auger conducting).

A passionate teacher, particularly of younger students, Marianne teaches out of her residence in the Mile-End since several years. As an accompanist she has appeared at recitals and competitions throughout Montreal and Quebec.

Marianne began her studies at the Montreal Conservatory of Music in 2006 with Suzanne Goyette, and completed her Master’s with Richard Raymond. She has also participated in masterclasses and open lessons with such artists as Benedetto Lupo,  Peter Longworth and Marietta Orlov. She was also a selected participant for Domaine Forget’s first intensive piano sessions, which included masterclasses performances for Jean-Philippe Collard, Benedetto Lupo and Suzanne Beaubien.