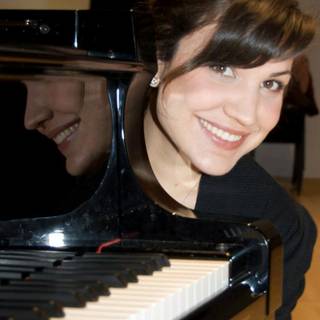 Gabrielle Gingras started studying music at 7 years old. She entered the Conservatoire de musique de Montréal in 1999 to study piano with Lise Boucher and Louise Bessette. In 2002, she won first prize in Chamber Music at the Festival de musique classique de Montréal. In 2004, she performed a concerto with the Joseph-François-Perrault string orchestra. Afterwards, she toured Europe with the Joseph-François-Perrault symphonic orchestra. In the same year, she performed with the Orchestre Symphonique de Montréal in concerts called Les matinees jeunesses. She participated in many master classes notably with the pianists Janina Fialkovska, Rolf Bertsch, Denise Trudel and Jean Saulnier. In parallel to her piano studies, she has performed in concerts, competitions and tours as a singer and a clarinetist. In 2008, she had a full scholarship to spend three months in Stuttgart, Germany, where she studied with Shosana Rudiakov. She just finished a chamber music Concours at the Conservatoire and now she will continue her master there. She will be also known as a massage therapist soon.