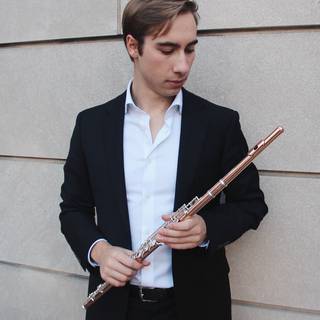 Benjamin was accepted at the Conservatoire de Musique de Montréal in 2010 where he spent 6 years under the guidance of Marie-Andrée Benny.  After completing his Baccalaureate degree, he pursued his studies at the Yale School of Music with internationally renowned flutist and pedagogue, Ransom Wilson, recently obtaining a Master of Music degree.  Additionally, Benjamin has taken master classes with flutists such as Mathieu Dufour, Emmanuel Pahud, Philippe Bernold, Jeanne Baxtresser, and Robert Langevin.

In addition to distinguishing himself in regional competitions, notably winning the Grand Prize at the Concours de Musique Classique de Lanaudière (2013), and placing first in his category at the Sorel Tracy Festival in 2011 and 2013, Benjamin was awarded the first prize at the Canadian Music Competition in 2010.  Most recently, Benjamin received the Grand Prize at the prestigious OSM Manulife Competition, making his début with the Orchestre Symphonique de Montréal.  Benjamin has also been invited as a guest soloist with the Orchestre Métropolitain du Grand Montréal, the Redlands Symphony Orchestra, and the Newfoundland Symphony Orchestra.

In January 2018, he recorded Sergei Prokofiev’s Sonata for Flute and Piano op.94, Francis Poulenc’s Flute and Piano Sonata, and Denis Gougeon’s L’Oiseau Blessé with pianist Mariane Patenaude in Radio-Canada studios, subsequently broadcasted on ICI-Musique. In February, he performed Le Prélude à l’après-midi d’un faune at the Weill Recital Hall in Carnegie Hall with the Rolston Sting Quartet, June Han, and his colleagues from the Yale School of Music. Benjamin is a Wm. S. Haynes young Artist.